Have you ever noticed that God often uses you when you least expect it?  You might be dreading an upcoming situation, conversation, meeting or presentation - only to find that God uses that particular circumstance powerfully in your life and for His Kingdom.  The life and power of the Kingdom of God are not reliant on you.  However, God…

 $375,000 is provided to the Food Protection Program (4510-0020) to carry out mandated food inspections and related activities that identify and prevent food-borne illness that could potentially harm public health.

out of state plates... i have a plan!

i thought now would be a great time to argue the issue of out of state license plates taking up all of the residential street spots.  I have a plan!  Apparently (someone correct me if i didn't read this properly) MA excise taxes are due from everyone who parks their car in MA for more than 50% of the year.  (This would apply to all of the students and such who claim that their car is their parents' and thus don't register or insure it in…

Hi- we have a few roadies heading out for a shade under 50 miles this Saturday, meeting at ULA at 9 AM. Steady paceline ride, probably 16-17 mph avg for the ride. Join us if you are up for it.

Amendment #737 has cleared the house. If it makes it through the senate, the BPL will get $.359 per capita for the Library of Last Recourse line item. This should be close to what the BPL projected overall from the state for the year but does not include other state sources. So we will see what that means at the next Trustees Meeting: May 10, 2011 - 8:30 AM - Central, Rabb Lecture…

Ask for the stenographic machine record of the last public meeting of Boston City Council. More complete than minutes, easier to read through than watching the video, budgeted for with public funds, the stenographic machine records Councilors' deliberations, all the words of the Councilors in the public meeting for public feedback, comment, questions, suggestions. Support open government, An Open Boston City Council …

[This was originally posted as a reply to another blogpost a few days ago. Since it probably got lost in the shuffle and I think it is an important post, I'd like to try to let it stand alone for a while.]

I'd like to suggest one campaign, I believe in, that few would speak up for (and is probably very controversial). That is that prostitution should be legalized, or at the very least, we should not insist that the police crack down on prostitution. Prostitution is more of… Continue

I am writing to you as an Attorney,…
Continue

Women Outdoors—a national, nonprofit, all-volunteer organization promoting wilderness activity, leadership and outdoors skills (check out our site)—is thrilled to be sponsoring two all-women teams for the Run of the Charles race on Saturday, April 30—so thrilled, we plan to have…

What causes your conflicts with others?  Do they most often come from differences or from misunderstandings?  When discrepancies are real, how often do they need to become areas of conflict or battle lines?…

Mass. Budget has Good News for our Libraries! Help us to Bring More!

The Commonwealth's House Ways and Means Budget came out last week and it has the potential to increase funding to the Boston Public Library and other libraries in the state with your support!

Currently Reps. Michael Moran, Byron Rushing, Kevin Honan, Nick Collins, and Aaron Michlewitz have an amendment pending, #737, that would increase the amount for the "Library of the Commonwealth" from $.35 to $.359 per resident. Another amendment, #81, by Rep. Peter Kocot of Northhampton, would… Continue

Has Started At The Roslindale Community Centers

Space is allocated on a first-come basis.  Don't get left out.

Program weeks start July 5 and run till August 19, with two additional "bridge weeks" available through the beginning of the school year.  Daily programs run from 8 AM till 6 PM and…

Come to Wake up the Earth!! Saturday, 5/7, StonyBrook!

Come one, come all to the most fabulous annual celebration of Spring! Check out Spontaneous Celebrations website for more info:

Also, try to pick up trash wherever you go--the snow has melted, and our neighborhood needs a little spring cleaning!

and check out the Guitar Circle on Sunday evenings at 7:30 at Spontaneous Celebrations on Danforth Street:…

Neighbors,
I'm setting a goal to grow our network to 60,000 neighbors strong. Bold, but possible.
Our attempt to operate 18 neighborhood social networks in 2009 and 2010 did not exactly work. I'll spare you the details...
Instead of giving up (not an option for us), we've made our JP network the citywide network and are now setting in motion our plan to become 60,000 neighbors…
Continue

What should we do as neighbors this spring and why?

I'm inviting all NFN members from all neighborhoods to join this, our new citywide network.

To get things going, I'm posing the first of a series of questions (the next are up to you - add a blog post now):

This question is: What should we do as neighbors this spring and why?

Specifically, I am looking for examples of actions we can take, behaviors we can change,…

Which bank do you do business with and why?

Maureen just posed a question "does anyone use a national bank with a branch in JP that you are happy with?" in the Jamaica Plain Community Discussion Forum. I'd like to expand on her question.

If you have a desire to grow in your faith, I have good news for you.  Your spiritual hunger is an indication that God is at work in your life.  The invisible God is drawing you closer to Himself.  Your hunger is a sign of life.  If you are not satisfied with your spiritual life, that is a good sign - it means you want more… 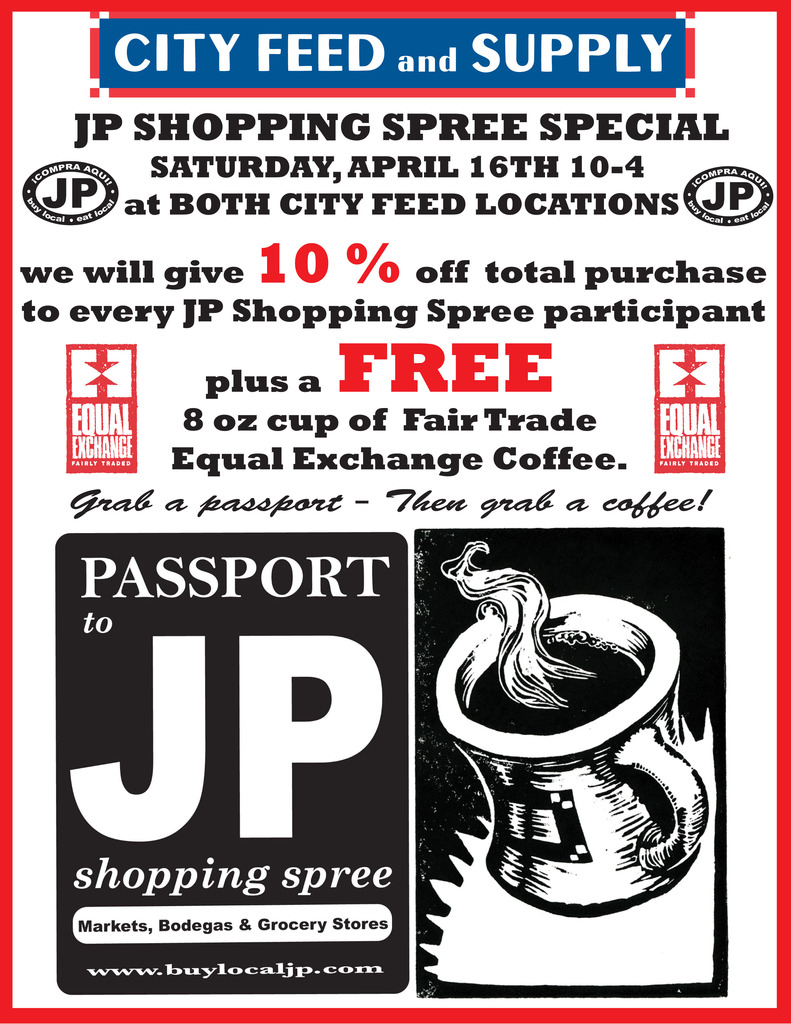 JP SHOPPING SPREE is TOMORROW! Check out your neighborhood markets & WIN PRIZES!
DOWN LOAD YOUR PASSPORT HERE!
http://www.buylocaljp.com/passport.pdf
- or get them at any participating market!
Also Check out the BUY LOCAL JP web…