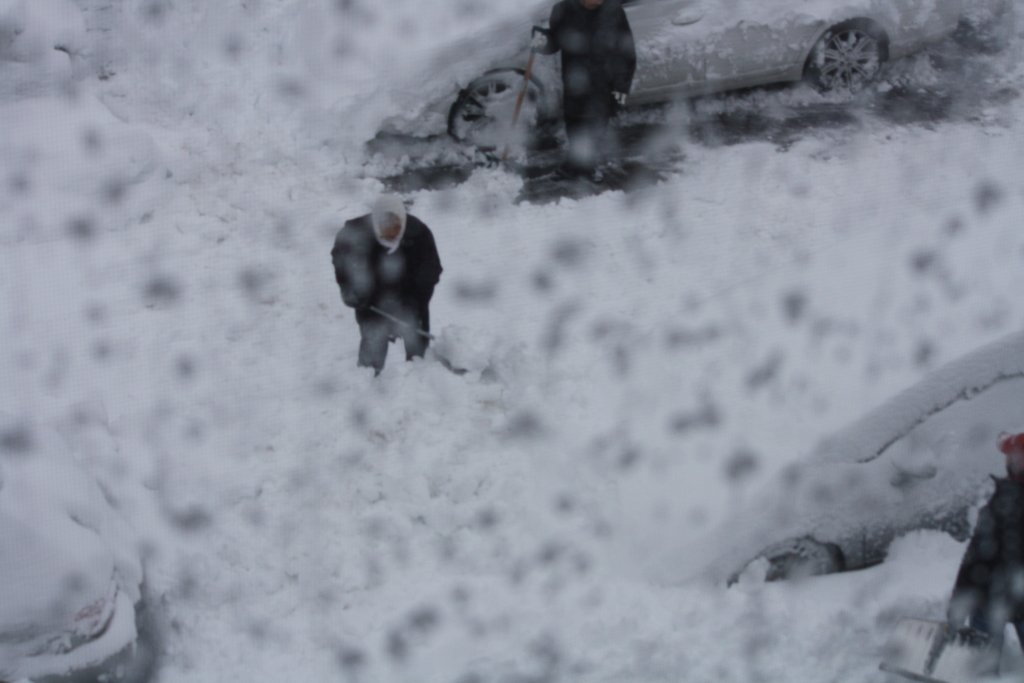 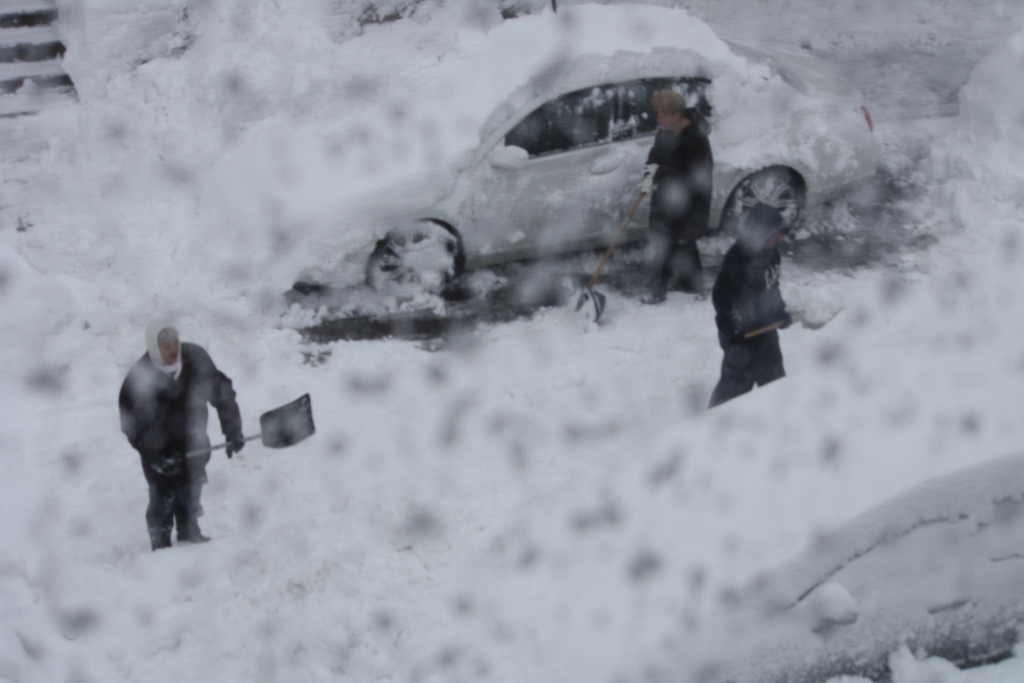 Comment by Quinn on January 31, 2011 at 1:04pm
Why would our neighbors "reserve" public spots is a better question. We're leveling the playing field and there is nothing wrong with that. If people are vengeful in addition to selfish, that's a shame. But they have no right to be either, the street is everyone's. Spot savers should be outlawed completely. We're all in the same boat, putting out "property" to save a spot is what exacerbates the problem, not removing the offensive items.

I can't believe you guys are moving spot savers for spots you aren't taken.  I honestly believe you're adding to the problem... people take the spots and then those who marked them think the person who parked there did it... but it was you, someone not even involved with the situation.

Why would you do something like that to your neighbors? It's already tense enough this winter, I can't believe anyone would exacerbate the problem by moving someone else's property.  We are allowed (according to cityofboston.gov) to use a space saver for 48 hours after the end of a snow emergency.  After that time period, I think it's fair to move them, but only if you are parking in that spot.

I just posted a blog post about this yesterday on NFN.  This year happens to be pretty bad for people who park on the street - not only are people sneaking around and moving spot-savers, but people aren't snowing sidewalks or parking spaces out properly.  I had to shovel out 3 different spots from the last storm because someone took my spot (and now I know someone ELSE probably moved my 48-hour-allowed spot saver).  The other issue is people shoveling snow into the street instead of onto their own property.  My property is full… but not everyone's is.  Why don't we all preserve the parking we have instead of filling the street with mounds of snow?

Also.. it's easy for someone to say that you should just move into a place that has parking.  That's not the point here - the point is that people are doing a lot of crappy things to their neighbors and unnecessarily making it worse for everyone.

Comment by Matt L. on January 18, 2011 at 5:56am
My original intent when starting this post was to bring to mind some very less than civic minded people who removes snow from their cars at the expense of their neighbors, but the conversation has evolved into one of parking rights and the age old Boston rule of spot saving. Both is an issue of personal choice and prioritization.

Simply, if having a dedicated spot is a priority, then buy/rent a home where parking is available and abundant. Prior to moving to JP, I've lived in both The Fenway and Cleveland Circle. Neither are havens of plentiful parking and that is an expectation that I set with myself when selecting these neighborhoods. I worked in Boston, took the T to work and drove seldom. When we were expecting our child, one of our priorities in selecting a home - beyond more space - was parking, ie a driveway! We didn't even look at a place without it! So whether we're talking JP, Southie, Back Bay or Beacon Hill, we're all made conscious decisions on where we live - both pros and cons.

It all boils down to common sense - black and white. If you need to remove snow, don't do so in a manner that screws your neighbor. If you need access to your vehicle on a 24/7 basis, choose where you live wisely and plan accordingly - then live with the decision you've made.

The only reason I'm going to disagree with this is as a parent of a small child, living on a narrow, one-way street in a residential neighborhood of most single-family or two-unit houses. Being more or less the only house on the entire block that has no drieway, we have no choice but to park on the street... and given the unfortunate fact of one non-civic-minded neighboring house that has an almost non-stop stream of visiting cars and people - far more than the four or five parking spots they have can accommodate - we NEVER know if we're going to have a space anywhere near our door. Add to that some very fine neighbors who teach out of their home and ALSO have a lot of traffic - parents of students just sitting in their cars for an hour at a time in front waiting - and it can be a challenge.

Many of the folks on our street - including some with driveways - use markers to block off the spaces they've cleared in front of their houses (some even use them when there's no snow). For us, the combination of no driveway and constant, unpredictable traffic from the neighbors and their friends/acquaintances/students makes it a self-defense move. Sure, we can (and do) park around the block when there's no snow. But even five days after a blizzard, with huge piles of snow still around, we are still using the markers, because with a 4-year-old, a dog and bags of groceries in tow, it can be a real drag to find a random car in the only clear spot anywhere near your house, or someone just sitting there idling right in front of your door. They might be gone in 15 minutes, but we can't wait around to find out, and so, we mark out our space.

We pitch in around the neighborhood, clearing snow for others, not piling it in awkward places, we do neighborhood cleanups, help out where we can, and generally feel we do our part to be civil neighbors. I would be pretty angry to have someone take it upon themselves to arbitrarily move the markers I set out - not garbage or plastic chairs, either, but road cones I bought. YOU might not like it, but if you don't know the situation and you aren't trying to park there, it's not your place to butt in.

Well said, Terrell. But, even one day after the storm, it should be finders keepers. If you are disabled, the city will install signs so you always have a spot outside your dwelling.

I move spot savers too, and I hope everyone else catches on and does the same!

I agree that the "reserved" spaces are inappropriate and antisocial. Yes, if you have to go out for an emergency run during the middle of the storm, and particularly if you are disabled and unable to walk far in the storm, this sort of thing is perhaps defensible. But 3 days later, when the storm is well over, it is just selfishness. Everybody had to dig their cars out--it does not make you special, or entitle you to squatters rights on a public street. I've seen markers in the street after a 3 inch snowfall. And of course, having open spots reserved effectively reduces the supply of parking.

I'll cut people some slack for a day or two after the storm. After that, I start routinely moving markers out of the street whenever I pass by.

This happens to me every snowstorm.  My neighbors snowblow their sidewalk and stop RIGHT at our property line. They turn the blower so snow gets heaped up on my sidewalk.  Then they take out a plow and plow the parking space in front of their house, piling up all the snow in front of my house, and it cascades onto my sidewalk.  My husband is mobilized in the Army and I am home alone with a newborn who just got out of the hospital, a five year old, a dog, and an orange plastic shovel.  Not that they should come over and shovel for me, but it is sad to me that they make my shoveling job SO much more difficult.

Comment by Quinn on January 14, 2011 at 10:07pm
And then come the plastic chairs and garbage cans reserving spots on a public street. I dug out my car, carrying snow across the street to a yard that could handle it. Then I left that spot and went about my business, not leaving crap in the spot. I live on a small street that is really short on parking no matter what the season, and tonight I came home to 5 spots reserved by trash. Unacceptable, and unexpected. I thought my neighbors had a little more class. Bad job, Jamaica Street!

Comment by Robin A Hu on January 14, 2011 at 6:55pm
Yeah, our neighbors dug out their driveway and threw all of their snow (over the retaining wall) blocking our alley, and right up against our house.  We'll be lucky if the basement doesn't see water as it melts.  Seriously!?!?!?!?!

Here something I saw that frankly, I could hardly believe someone would do to another... 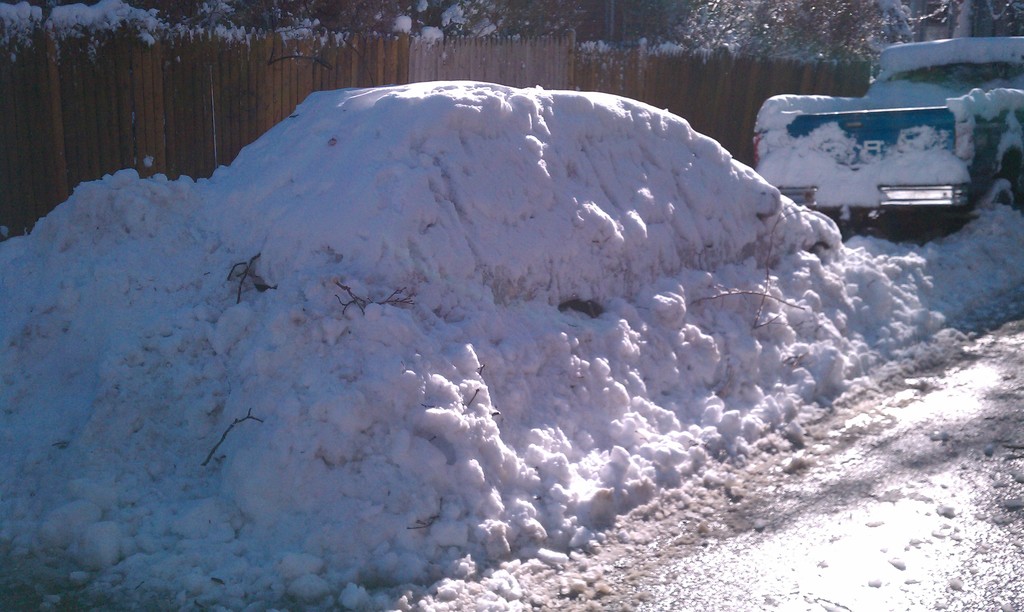