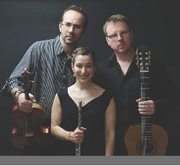 The Alturas Duo (guitarist Scott Hill and violist and charango player Carlos Boltes) with guest flutist Melanie Chirignan will conclude the 13th season of Sunday concerts at the Loring Greenough House, on Sunday, May 5, 2013, at 3:00 p.m., at the historic Loring-Greenough House, 12 South Street, Jamaica Plain MA, with a program of modern classic music with an Andean rhythm, including works by Leo Brouwer, Heroclio Fernandez, Masatora Goza, Ernesto Cavour and Roberto Marquez..

The Alturas Duo has been recognized as one of the most engaging ensembles performing in the chamber music world today. The only group of its kind, the Duo was formed with the idea of playing South American and classical music by bringing together the unusual combination of the viola, charango and guitar, and in doing so, creating passionate music that moves at ease between the Baroque, South American folk rhythms and new pieces written especially for the Duo.

The Alturas Duo and Melanie Chirignan came together with the idea of performing both classical and world music with the unusual combination of the flute, viola, charango and guitar. Individually and as a trio, the members have performed in Canada, the United States, Puerto Rico, Brazil, Chile, Ecuador and Bolivia.

Meet the artists at afternoon tea following the program.

The Alturas Duo was formed in 2001 by Canadian guitarist, Scott Hill and Chilean violist and charango player, Carlos Boltes with the idea of combining South American folk music and traditional classical and contemporary music. The Charango is a small Andean lute. The name Alturas (Spanish for heights) is derived from the poem "Alturas de Macchu Picchu" by Chilean poet, Pablo Neruda (1904-1973). For more information, visit www.alturasduo.com.

Composer Masatora Goya has been selected as one of the recipients of the Jerome Foundation Grant; he was commissioned to write new music for the Alturas Duo which Melanie will be recording..