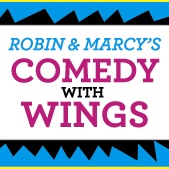 Boston’s first ever and only ongoing female comedy night!  Comedy with Wings is the designated hot spot for female comedians to hone, craft and test out their material in front of a fun, live audience of 50+ local comedy fans.   CWW is not limited to just stand-up.  Included will be stories, songs, improv, skits, impersonations and more. Acts are limited to 1-10 minutes in length.  Each month there will be a seasoned special guest not to be missed. Buy your ticket here.

Jill Gibson of All The Kings Men and Bent Wit Cabaret will be our featured performer in September.

Comedy with Wings hosts Marcy Goldberg Sacks and Robin Maxfield are commited to bringing out the best in female comedy. The audience is sure to have an experience that is uplifting, hilarious and most importantly, super-absorbent!  Women interested in being considered for performing should send an email with their name, description of their act, length, and any urls to comedywithwings@gmail.com.

RSVP for Comedy with Wings to add comments!