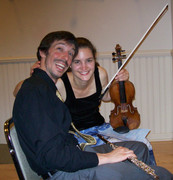 On February 5, 2012, the Duo SopraVoce - Annegret Klaua, violin and Orlando Cela, flute - will present a concert of original music for flute and violin that spans 300 years, including music specifically written for the duo, at the historic Loring-Greenough House, 12 South Street, Jamaica Plain MA, as part of the Sunday Afternoon at the ‘Greenough House parlor concert series.  Selections from the Baroque to the contemporary will enliven your afternoon, interspersed with three world premieres by composers from France, Australia and Israel.
Meet Orlando and Annegret at afternoon tea following the program.

Violinist Annegret Klaua is a freelance musician and teacher in the Boston, MA area. She performs with the Boston Classical Orchestra, Boston Modern Orchestra Project, Alea III, and the Boston Lyric Opera. She has taught at Bridgewater State College, Brevard Music Center, Governor's School of North Carolina, was a teaching and research assistant at Indiana and Brandeis University, and is currently on the faculty of the Winchester Community Music School. Ms. Klaua has participated in the Aspen, Sarasota, Spoleto/Italy, and Verbier Festivals and has given many recitals in her native Germany, in Poland, Austria, Switzerland, the US, and Taiwan.

Orlando Cela started playing flute at a very early age in his native Venezuela. He pursued flute studies at DePauw University, in Vienna Hochschule for Musik und Darstellende Kunst, and at the New England Conservatory. Orlando is the music director of Willow Flute Ensemble and many other chamber ensembles. He has served as faculty in UMass Dartmouth, SUNY Fredonia and College of the Holy Cross. Orlando’s recordings can be found in iTunes, CDBaby and Amazon, and include music from all genres and time periods.

RSVP for Duo SopraVoce, flute and violin to add comments!