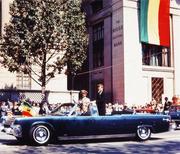 Something that has been weighing on all of us is the name. Guvna Dub is Scott Palmer. It was his vision to have a dub band consisting of drum, bass, DJ, dub mixer, and special guests laying down the crucial original dub and hip-hop rhythms live. The Guvna Dub Sessions record is brilliant. We are all very proud to be a part of it. Very proud that we were able to get it released and dedicated to the life and music of our brother Scott. We have all been doing this dub reggae and hip-hop stuff for years, and the same core group of musicians have had many different names. You may currently see the same group of musicians performing in and around Boston as Mang Dub, Dub Appocalypse, Guvna Dub, and who knows what else. We do it for the love of dub and of playing this music with one another.....And free Jameson. So when work began on this next project we debated the name. Is it right to release another Guvna Dub record? Is it a tribute to Scott to continue the Guvna Dub Sessions vision and release more music as Guvna Dub, or were the Guvna Dub Sessions, those magic nights in Acton, Ma. with Scott, the beginning and end of the Guvna Dub? It was a long and difficult conversation. We decided that to continue as Guvna Dub, in the memory of Scott Palmer, is more of a tribute to him and a dedication to bringing the original Guvna Dub Sessions record and music to more people. Capping it at one record and coming up with a new name for this new music was an option, but ultimately keeping on with his vision and in his honor is what we decided was right. I wanted to share this with you just to let you know that we’d been thinking about it, talking about it. We made the decission a few months ago and it just came up again when talking to a friend. He referred to it as "whatever you guys are calling it". We are calling it Guvna Dub. It continues in the vision and honor of our late friend and brother Scott Palmer.