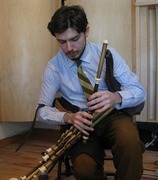 Suggested donation $15-20+ plus $1 preservation fee
Several of our recent Celtic concerts have sold out, make a reservation now to insure a seat - notlobreservations@gmail.com
notloB website - https://sites.google.com/site/notlobmusic/

Joey Abarta has spent the last ten years of his life touring North America, Europe, and Asia, teaching and performing music on the uilleann pipes. A Los Angeles native, he first received instruction on the pipes from Dubliner Pat D’Arcy, a founding member of the Southern California Uilleann Pipers Club. His musical skills have been further honed by several visits to Ireland, a year-long stint working in Japan, and continuing relationships with master pipers. In August of 2009, Joey’s accomplished playing won him an All-Ireland championship, placing second worldwide at the Fleadh Cheoil na hEireann. Currently based in Boston, Joey divides his attention between performance, teaching, and recording. In addition to performing solo, he tours with Mick Moloney and the group The Green Fields of America; while at home, he organizes the meetings of the Boston Pipers Club, teaches for Comhaltas’ Boston Music School, and organizes various traditional music concerts and events. His debut solo album is due out this June.
http://joeyabarta.com/

Paddy League's intuitive accompaniment style — on bodhran, guitar, and bouzouki — provides irresistible rhythm and a distinctive traditional sound. With a life-long passion for both Irish and Greek traditional music, Paddy is a multi-instrumentalist who is also influenced by many of the world’s vernacular and art music traditions, from the Mediterranean to Brazil. He exhibits vitality and a natural touch on every instrument, and an exceptional ability to respond to often hidden nuances in a tune. His renderings of traditional songs, along with many of his own instrumental compositions, highlight his multi-faceted musicianship and bring great variety to his music. Paddy has performed extensively throughout North America, Brazil, Greece, Cyprus, Turkey, and Europe, and been featured on over one hundred recordings.

Fiddler Nathan Gourley hails from Madison, Wisconsin, where he grew up in a musical family that often traveled to folk and fiddle festivals across the country. Now based in the Twin Cities, Nathan puts his passion for Irish music into practice as a member of The Máirtín de Cógáin Project, The Doon Ceili Band, and O’Rourke’s Feast. He can also be found at the MSP airport en route to many yearly excursions to Ireland, New York, Chicago and other hotbeds of traditional Irish music.