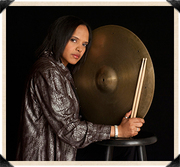 The 2012 Ensemble will perform a repertoire of all Coltrane compositions, including “Moment’s Notice,” “Central Park West, “ “Impressions”, “After the Rain,” The Father and the Son and the Holy Ghost,” and a ‘Trane blues medley. In what has become a JCMC tradition, the Ensemble will close with “Peace on Earth.”