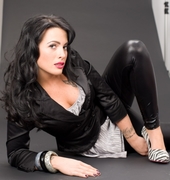 10:00 PM - Lisa Bello MUSICA R&B/Soul/Hip Hop - - Lisa Bello MUSICA R&B/Soul/Hip Hop Description:10:00 PM - Lisa Bello MUSICA R&B/Soul/Hip Hop Description:****************************************************************"Just because your voice reaches halfway around the world doesn’t mean you are wiser than when it reached only to the end of the bar." **************************************************************** Nine out of ten black people agree that this white bitch can sing. The tenth one is tone deaf. That’s how it’s always been for Boston soul chick Lisa Bello, who rocked the Apollo cold at thirteen years old and smashed through the public school talent show circuit before her sweet sixteenth. Every artist gets labeled, and Lisa’s never minded being the tattooed Italian broad with Mary’s pipes and Whitney’s gusto. Lisa had to shine. Her brother Louie Bello casts a thick shadow as Boston’s premier r&b star and songwriter. In order for Lisa to get recognized, she’s had to deliver live sets that rewired the way people think about Caucasian pop singers. Her formula: freak a couple covers and flash some skills, and then move in with original material. Though she’s been performing live since middle school and been selected twice to perform on JAM’N 94.5’s annual Summer Stage, Lisa only recently hit the lab hard. In the past six months she’s written her yet-to-be titled debut album and recorded with established Boston beat teams including Mass Appeal, Surefire and John Johnson productions. The resulting sound is big enough to move dance floors but minimal enough to let Lisa bust loose. On the lyric front, let’s just say that homegirl has equal parts intellect intellect and attitude. Since she started dropping singles on line in late 2007, Lisa’s been one of Beantown’s most requested collaborators. Working with artists including Jake the Snake, Omega Red, Dre Robinson, D-Quest, DJ On&On, JayCeeOh, and Makio from MTV’s Making the Band, she’s quickly established herself as the r&b voice to be reckoned with around New England. But Boston is already getting small. Clubs like Felt, Mantra, Revolution Rock Bar and The Middle East have taught her well, but Lisa’s game is too unique and marketable for her to stay trapped beneath glass ceilings. Hipsters dig her dance floor-friendly backdrops, soul cats flock to see her front an eight-piece band, and hip-hop crowds haven’t heard rhythm packaged this tightly since Jodeci dominated airwaves. Don’t front – you know she’s got you open too. (Bio by Fara1) http://www.myspace.com/bellobabyrecords