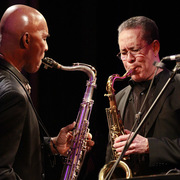 The 41st John Coltrane Memorial Concert (JCMC) is a special holiday celebration, honoring two master JCMC alumni, Bill Pierce and Stan Strickland, and featuring the 14-piece JCMC Ensemble, with host Eric Jackson. JCMC has earned its reputation as being Boston's annual "rite of fall," by keeping true to Coltrane's desire to be “a force for good” and using his musical gifts to make the world a better place for all people. This year, the annual “rite” falls into the holiday season, with a renewed hope for peace on earth.Complete details on this special gathering can be found at www.friendsofjcmc.org.

The Friends of John Coltrane Memorial Concert (fJCMC), in collaboration with Northeastern University’s Office of Student Affairs and the College of Social Sciences & Humanities, presents My Favorite Things, celebrating the holiday spirit Coltrane-style, bestowing musical good will to all people. This year’s holiday concert will also honor two master JCMC alumni, Bill Pierce and Stan Strickland, both of whom have made indelible musical contributions to Boston and well beyond. My Favorite Things is a tribute to these two musicians, planned as an evening of joyous celebration, as well as reflection.

This 41st John Coltrane Memorial Concert features a 14-piece JCMC Ensemble under the musical direction of Dr. Carl Atkins, who has created a performance repertoire that will re-animate Coltrane’s compositions, legacy, and philosophy. The concert includes the evening’s theme “My Favorite Things,” along with such masterpieces as “Greensleeves” (arranged by Leonard Brown and Emmett Price), “Afro Blue” (featuring Stan Strickland and arranged by Atkins), “Like Sonny” by Coltrane (featuring Bill Pierce), among other compositions composed or performed by ‘Trane. These Coltrane works will be presented in new arrangements showcasing the 2018 JCMC Ensemble’s great musicianship, prowess and flexibility. The concert will be hosted by Eric Jackson, the “dean of jazz radio in Boston.”