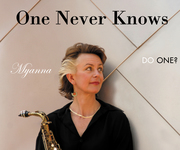 09/13/2009 10:00 PM - Myanna "Sax Goddess" [Edit] [Cancel]
435 South Huntington Avenue
Jamaica Plain, 02130
US
Cost:Always Free
Description:MYANNA In the 1970s and 1980s, it was very unusual for a woman to play saxophone. Then Myanna came along and made headlines with her strong, gutsy horn-work and kickin’ compositions! Now, almost three decades later Myanna is still making news with the release of her latest CD. Titled, One Never Knows, Do One? this disc is a solid jazz release . . . sure to garner critical attention. Illinois Jacquet, Sonny Rollins, Jimi Hendrix, and B.B, King were saxophonist Myanna Pontoppidan’s core musical influences, beginning in her late teen years. Myanna grew up in Weston, Massachusetts and after graduation went on to Berklee College of Music in Boston where she studied with master saxophone teacher Joe Viola. Her career soared early on; she sat in with Grover Washington, Jr., performed with Gray Sargent, Martha Reeves, Ronnie Specter, and the Platters, among others. After a stint at University of Massachusetts in Amherst (where she studied with bebop drum legend Max Roach), Myanna sprinted off with the respected R&B Northampton-based band, “Lilith.” Myanna left that group in the late ‘70s and joined the Bill Bellamy Project - an original jazz/R&B band. In 1984, she, saxophonist Cercie Miller and singer Didi Stewart put Girls’ Night Out together as a lark - playing ‘60s girl group songs. The band ended up staying together due to high demand - and added more and more originals, until it morphed into an original rock band that also played some oldies. Chris Hamel of the Springfield Morning Union described the band thus: “member for member and in total, one of the best rock acts that New England has ever produced.” “Girls’ Night Out” was chosen as one of five finalists in Musician Magazine’s 1986 national “Best Unsigned Band in America” contest. Around the time that Girls Night Out split up, Myanna joined another highly successful band, The Love Dogs, and also formed her own band, called simply MYANNA. “There’s nothing quite so satisfying as playing one’s original music with a bunch of fine musicians,” says Myanna. From the moment she and her band first stepped onto the musical stage, she and the band garnered widespread attention. She released her first CD, Myanna, and in 1992 she won the prestigious Boston Music Award for “Outstanding Local Jazz Act.” She and the band were nominated again in 1994. Then the Myanna band went on to win the coveted Boston Phoenix/WFNX Best Music Poll as the “Best Local Jazz Act” in both 1994 and 1996. Along the way, Myanna set out to create an outlet for her growing wealth of original material. The pop-jazz style of her first CD, Myanna, evolved into a funky, danceable sound on her second, highly acclaimed release, After Hours, on the Bridge City label.