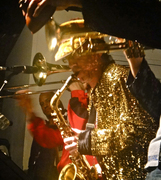 Funk & street beat improvisational brass band the Revolutionary Snake Ensemble will bring down the house in a special Mardi Gras show held in the Regattabar. After 6 years traveling & playing on the Amtrak Crescent train to New Orleans to march with the Krewe of Muses for their annual Mardi Gras parade, the Boston-based Snakes celebrate this year’s Mardi Gras, as well as the Chinese Year of the Snake, with a series of shows closer to home. For their Cambridge show, the over-the-top band, featuring Jerry Sabatini (trumpet), Ken Field (alto sax), Tom Hall (tenor sax), Dave Harris (trombone & tuba), Phil Neighbors (drums), and Blake Newman (bass), will be joined by Grammy winning saxophonist Charles Neville of Neville Brothers fame.

As part of their Northeast-based Mardi Gras tour, the Snakes will also be performing at the BAMcafé in Brooklyn on February 9, joined by special guest drummer Kenny Wollesen.

The group's most recent record, "Forked Tongue," spent 2 months on the CMJ North American jazz top 20 chart, and appeared on best-of-year lists in the Village Voice & in Estonia, plus in Georgia, Wisconsin, Kansas, Michigan, Massachusetts, Ohio, and NY. The recording features unique treatments of music by Field, Ornette Coleman, Billy Idol, and others.

Notable Revolutionary Snake Ensemble performances have included the Krewe of Muses Mardi Gras Parade (New Orleans), the Kennedy Center for the Performing Arts (DC), Tonic (NYC); the Museum of Fine Arts (Boston), the Brooklyn Academy of Music (NY), the Puffin Cultural Forum (New Jersey), Berklee Performance Center (Boston), and many other venues. The Snakes have traveled by train six times from Boston to New Orleans, playing on board the Amtrak Crescent, to march with the Krewe of Muses in their annual Mardi Gras parade.

RSVP for Revolutionary Snake Ensemble celebrates Mardi Gras and the Year of the Snake -- Regattabar, Tuesday, February 12, 2013 to add comments!