The Grand Fatilla - No Cover 10pm 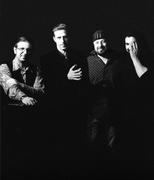 Grand Fatilla began as an informal trio when Club d’Elf bassist Mike Rivard, electric mandolinist Matt Glover and accordionist Roberto Cassan got together to explore their mutual love for folk music from all over the world, especially the styles born out of the gypsy diaspora. Occasionally gigging around Boston/Cambridge when schedules with their other bands allowed, the trio became a quartet with the addition of percussionist and singer Fabio Pirozzolo, and Grand Fatilla was born. A Monday night residency at Cambridge’s Atwoods Tavern has generated a considerable buzz, as enthusiastic audiences embrace their passionate take on Modern Global Music. Like an iPod on shuffle the group jumps from Argentine Tangos to Italian Tarantellas...from Turkish sacred Sufi songs to Irish reels...Moroccan trance to Bulgarian dance music, all performed with an emphasis on improvisational group interplay and playful spontaneity. In this age of heightened global consciousness the repertoire that Grand Fatilla performs acknowledges and pays homage to the idea that it is indeed One World that we all live in, and the music of diverse cultures enriches us all. Each member of the band brings a distinct flavor and area of expertise in different World musics to the collective sound: Cassan and Pirozzolo both hail from Italy and play locally with the Italian folk group Newpoli, and both have also intensely explored various Balkan musics; Glover came to Boston from his native Newfoundland where he absorbed the Celtic influences and fiddle music of that area, as well as studying the South Indian stylings of mandolinist U. Srinivas. Rivard, who is also a member of local Indian-jazz group Natraj, has a passion for North African music, especially Berber and Gnawa music from Morocco, leading him to study the Sintir, which is a 3-stringed bass lute used by the Gnawa in their ceremonies. The group has a special love for Brazilian composer Hermeto Pascoal, often performing his beautiful composition "Little Church" (which they first heard on Miles Davis’s Live/Evil album), as well as a deep affinity for Argentine Astor Piazzolla and his Tango compositions. Original compositions by the band members inspired by the folk and world music influences they share round out the group’s repertoire.

RSVP for The Grand Fatilla - No Cover 10pm to add comments!