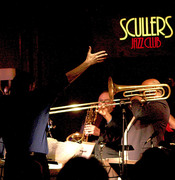 Praised for "exuberance, imagination and sheer brio" (Jazz Review UK), the Aardvark Jazz Orchestra kicks off its historic 40th season at Scullers with an exhilarating show spanning the Aardvark spectrum, from originals by director Mark Harvey to music from the Basie, Ellington, and Woody Herman bands.

The show will celebrate the release of Aardvark's 11th CD, "Evocations", on Leo Records (UK), one of the world's leading adventurous music labels.  The band will perform selections from the new disc, including an evocative modernistic treatment of the New Orleans staple "Just a Closer Walk with Thee," and Mark Harvey's "Rascals and Scoundrels."  Aardvark vocalists Jerry Edwards and Grace Hughes will be spotlighted in Basie's "Every Day I Have the Blues" and Ellington’s "Tell Me It's the Truth."  Also on tap:  Harvey's "Cantata Tubulidentata" (The Song of the Aardvarks, honoring the band's 40-year mark) and the lush "Early Autumn" by Newton native Ralph Burns, a late-1940s hit for Woody Herman and the breakthrough recording for Stan Getz.