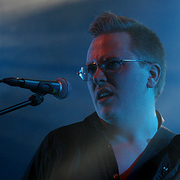 Dear Leader formed after Aaron Perrino’s former band, The Sheila Divine, broke up. He spent the early months of 2003 at Moontower Studio in Cambridge, Massachusetts recording new songs. Perrino officially announced his new project in April of 2003. Dear Leader played its first live show on July 1, 2003 at The Lizard Lounge in Cambridge, Massachusetts – playing a residency every Tuesday of that month premiering new songs at each show. That same day saw the release of the “My Life As A Wrestler” 7″ vinyl single, which featured the song “Slow Death Shadows” as the b-side. The next week, the War Chords EP was released featuring “Wrestler” and five additional songs recorded by Darren Ottaviani with additional production and mixing by John Dragonetti. It marked quite a change from Perrino’s previous band, with softer acoustic songs and a new vocal style. Now Aaron and special guests are here to perform some new songs and old for your listening pleasure, enjoy.